This site was designed for the latest version of Chrome, Firefox, Safari, and Internet Explorer (version 10+). Some features may not work correctly in your browser. OK
Vehicle Preview: 2022 Mercedes-Benz C-Class Sedan 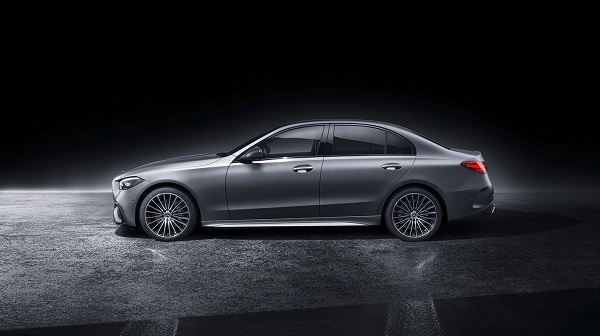 For years, the C-Class Sedan has served as an entry point to the Mercedes-Benz brand. The 2022 C-Class will get a total redesign that could have a major impact on the entry-level luxury segment. Will it set a new standard for what customers can expect from luxury automakers’ most affordable offerings?

The 2022 Mercedes-Benz C-Class Sedan will be powered by the same turbocharged 2.0-liter four-cylinder engine as the 2021 model. It’s one of the few unchanged areas and the engine still produces 255 horsepower and 295 lb-ft of torque. However, the powertrain is now also enhanced by a 48-volt mild-hybrid system capable of sending an extra 20 ponies and 148 lb-ft of torque to the wheels. Mercedes-Benz says the 2022 C-Class will accelerate from 0-60 mph in 5.9 seconds, but given that the current model has been tested to be at least half a second faster than that, the estimate seems conservative to say the least.

Though the powertrain is largely unchanged, the chassis isn’t. The 2022 C-Class gets a revised front multilink suspension and an optional rear-steer system, just like the new 2022 S-Class. In the latter, larger car, it’s to enhance maneuverability. In the 2022 C-Class, it’s all about making handling even better.

Compared to the outgoing model, the 2022 Mercedes-Benz C-Class Sedan is 2.6 inches longer, 0.4 inches wider, and designed to look more aggressive. This is especially noticeable at the front: the grille is angled forward, the hood has more bulges, and the headlights are sharper than ever. And though it may not be obvious at first glance, every exterior panel on the 2022 C-Class is new. Some of its character lines borrow once again from the 2022 S-Class, bringing the entry-level luxury sedan more in line with the brand’s modern design philosophy. Notably, despite being longer and wider, the 2022 C-Class’s roofline is 0.4 inches lower, further emphasizing its sporty stance.

The most significant changes to the 2022 Mercedes-Benz C-Class Sedan can be found inside. It features a large new 12.3-inch, vertically-oriented touch-screen display. It tastefully sweeps up from the center console while being slightly tilted toward the driver for enhanced ease-of-use while behind the wheel. It runs on the latest version of MBUX infotainment system, which comes with built-in Wi-Fi, wireless Apple CarPlay® and Android Auto™ smartphone integration, and a smart digital assistant that responds to the “Hey Mercedes” voice command.

The list of high-tech features is staggering, even on the base model — many of which are once again derived from the flagship 2022 S-Class. For instance, every new 2022 C-Class features an 11.9-inch digital gauge cluster as well as driver memory profiles you can activate with a fingerprint sensor. The car simply oozes with technology, the coolest of which include touch-sensitive capacitor switches for the seat controls, a head-up display, inductive wireless charging for mobile devices, self-parking capability, and a deliciously crisp Burmester® 3D audio system.

The 2022 Mercedes-Benz C-Class Sedan delivers flagship S-Class technology and style in a smaller, more affordable car. As an introduction to the luxury brand, it’s difficult to imagine how the 2022 C-Class could be any better.