This site was designed for the latest version of Chrome, Firefox, Safari, and Internet Explorer (version 10+). Some features may not work correctly in your browser. OK
Vehicle Details: 2021 Chevrolet Corvette Stingray Performance 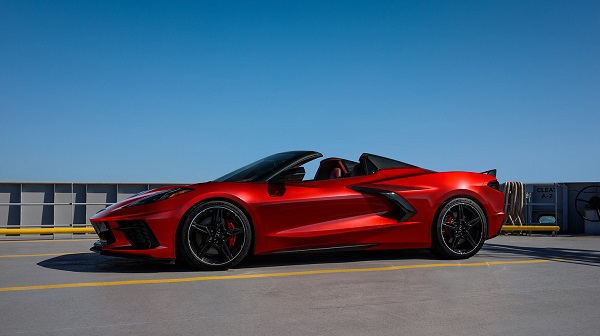 For nearly 70 years, the Corvette has set the high standard by which all American sports cars are measured. Not content to merely rest on the icon’s lofty laurels, Chevrolet set out with its Corvette C8 to bring that standard to a new height yet again. And with the 2021 Chevrolet Corvette Stingray, the most powerful production car of its kind yet, the Corvette over-delivers on that promise.

The supercar-quality curb appeal of the 2021 Chevrolet Corvette Stingray is meant for more than just drawing oohs and ahhs. Chevrolet engineers built the latest Corvette Stingray from the ground up, carrying over just a single part from the previous generation. Every aspect of the car is intentional, including the huge air inlets in the front and along the side that help propel it to impressive speeds.

The 2021 Chevrolet Corvette Stingray mounts its mighty small block V8 mid-vehicle — an approach that had never been taken before in Corvette history, yet one that provides incredible benefits. With its mid-engine setup, the new Stingray achieves Zora Arkus-Duntov’s ideal 40:60 front-to-rear weight distribution ratio, allowing it to be quicker and more responsive.

By building the body of the Corvette Stingray around this new configuration, Chevrolet engineers created a car cable of generating more downforce than its predecessor. It’s every bit as impressive under the skin with a more rigid architecture that uses aluminum and carbon fiber to optimal effect.

Power unlike any other Stingray before

The Chevrolet Corvette and small block V8 engines go together like peanut butter and jelly. With the new Corvette C8, Chevrolet builds on the long-lasting relationship by offering the most powerful V8 ever put forth in a Corvette.

Muscling the new 2021 Chevrolet Corvette Stingray forward is the fifth-generation 6.2-liter LT2 aluminum small block V8. Chevrolet reconfigured its V8 to be more compact yet more powerful, and the addition of an integrated dry-sump oil system allows it to be mounted lower in the middle of the vehicle, improving performance dynamics.

Out of the crate, the 6.2-liter LT2 V8 delivers 490 horsepower and 465 lb-ft of torque as well as a top speed of 194 mph, making the Stingray the most powerful entry-level Corvette ever built. To unlock even more of its awe-inspiring potential, you’ll want to equip the Corvette Stingray with the standalone performance exhaust option or the Z51 Performance Package, which increases output by 5 horsepower and 5 lb-ft of torque.

Among the key features offered in the Z51 Performance Package is a sport-tuned suspension, which builds on the already impressive SLA suspension geometry standard with the Stingray. With optimal spring rates and damping, the Z51 Performance Package-equipped Corvette Stingray is bred for competition. You can also upgrade to the even more incredible Magnetic Ride Control™ 4.0, which automatically adjusts to road conditions in as little as 10-15 milliseconds.

Other upgrades standard with the Z51 Performance Package include monobloc four-piston calipers with larger rotors, Michelin® Pilot® Sport 4S summer-only, and an electronic limited-slip differential. Altogether, the improvements offered with the package allow the Stingray to sprint from 0-60 mph in just 2.9 seconds.*

The Chevrolet Corvette has the long-standing reputation of being an American dream car. And with unrelenting performance capabilities at an affordable entry price point, Chevrolet sets out to help more Americans achieve that dream with the new 2021 Corvette Stingray.