This site was designed for the latest version of Chrome, Firefox, Safari, and Internet Explorer (version 10+). Some features may not work correctly in your browser. OK
Vehicle Profile: 2021 Porsche 911 Turbo S 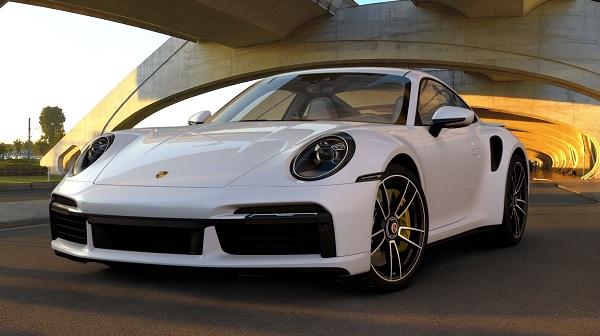 Of all the different Porsche 911 models, and the list is long, the Turbo S is one of the most coveted. That’s because — excepting the 911 GT3 and 911 GT2 RS, which are designed for the track more than for the street — the Turbo S reigns supreme when it comes to performance. Performance, however, is just one of the car’s many appeals.

The 2021 Porsche 911 Turbo S is the first of the 992-generation models, and thus comes with a significant evolution of the classic 911 Turbo design. It is 0.79 inches wider at the rear and 1.78 inches wider at the front, and the fenders — higher than the hood, in typical Porsche tradition — are more muscular than ever. The hood features recesses reminiscent of earlier 911 models, though the slanted, Matrix Design LED headlights and four-point daytime running lights leave no doubt as to the modernity of the car. That Porsche has managed to keep the 911 Turbo S’s bodywork looking as sleek as it has is a testament to its creativity, as there is more to the bodywork than just a devotion to aerodynamic efficiency, though that in itself is a challenge. It must also accommodate increasingly complex side air intakes that feature active adjustable flaps, as well as inconspicuously integrate a growing number of cameras and sensors for the onboard assistance and comfort systems.

The 2021 Porsche 911 Turbo S is the most powerful Turbo S yet. It uses a 3.8-liter, twin-turbocharged, horizontally-opposed six-cylinder engine that produces 640 horsepower and 590 lb-ft of torque. Porsche claims it will do 0-60 mph in 2.6 seconds (in large part thanks to its excellent Launch Control system) and the quarter-mile in 10.5 seconds. Its top speed is 205 mph. That’s a huge power boost over the last-gen Turbo S, and as if these figures weren’t enough, the car is even offered with a Lightweight package that strips the rear seats and uses lighter glass. Then there’s the transmission. Redeveloped from the ground up, the 8-speed PDK dual-clutch automatic enables gear shifts that don’t interrupt power and can be measured in milliseconds. It’s not only faster than the previous PDK, it’s also more efficient and comfortable. Driving modes, active aerodynamics, motorsport-proven ceramic composite brakes, all-wheel drive with torque vectoring, and active suspension all elevate the car’s performance to stratospheric heights.

Ferocious speed is all well and good, but not every moment you spend behind the wheel of the 2021 Porsche 911 Turbo S will be in pursuit of another tenth of a second. Fortunately, the interior of the Turbo S is as uncompromising as its performance. Quilted door panels, 18-way adjustable seats with substantial padding, and generous sound-absorbing materials set a comfortable stage for a high-tech experience.

A crisp 10.9-inch touch-screen display provides access to many of the car’s functions, though much of what the Turbo S can do requires no driver input. For instance, Porsche InnoDrive, a form of adaptive cruise control, uses radar and video sensors as well as navigation data to map the road ahead for up to 1.9 miles. It can control acceleration, deceleration and gear selection, but it doesn’t just regulate your distance from other vehicles; it also optimizes fuel efficiency and follows road laws. And at speeds of up to 37 mph, Traffic Jam Assist, a feature of Porsche InnoDrive, can even use gentle steering inputs to keep you in the middle of the lane.

Whether you’re stuck in a traffic jam or asking that turbo-six to give everything it has, the 2021 Porsche 911 Turbo S is a delight. Of course, nothing less could be expected from one of the company’s most coveted, and most expensive, offerings.

This article is presented by Zimbrick European