This site was designed for the latest version of Chrome, Firefox, Safari, and Internet Explorer (version 10+). Some features may not work correctly in your browser. OK
3 Delicious Recipes You Can Make with Leftovers 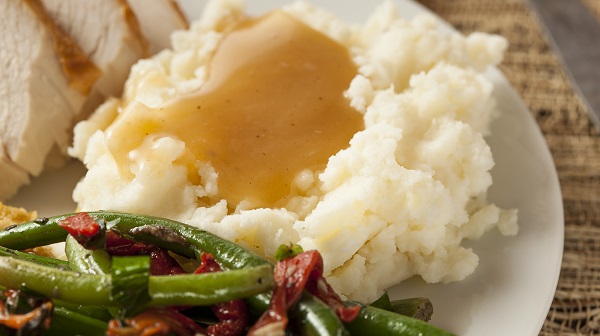 It’s the holiday season again, and your fridge soon will be packed with leftovers from the next family gathering. Instead of microwaving those leftovers to consume the same meal ad nauseam, you can transform already-cooked food into ingredients for new meals. Here are some recipe ideas.

A tub of plain mashed potatoes makes a terrible lunch. Food.com has a recipe by PalatablePastime for using those leftovers as the foundation of a delicious potato soup.

Cook three slices of thick bacon, and crumble them once they’ve cooled. In a large saucepan, sauté 1 chopped onion in butter until it’s golden. Carefully pour in 14 1/2 ounces of chicken broth and a couple pinches of salt, paprika and black pepper. As the liquid warms, stir in 2 cups of already-cooked mashed potatoes.

Bring the contents to a boil, and then lower to a simmer as you pour in a handful of cheddar cheese and continue stirring. Thicken with 2 tablespoons sour cream and 2 tablespoons heavy cream. Top with the bacon crumbles and some chopped scallions when the soup is ready to serve.

Use turkey in a pasta

If you cooked a huge turkey for dinner and have a stack of slices left over, you can substitute it into a variety of dishes in place of the original meat. For instance, The Casserole Queens shares this recipe for turkey pasta bake with Country Living.

Boil 8 ounces of penne pasta to cook it, then drain it, leaving the noodles in the warm pot. In a skillet, cook a package of cremini mushrooms with 1 tablespoon olive oil and a pinch of salt. Move those to a plate, and then cook 1 diced medium onion and 2 sliced celery stalks in more oil and salt. After a couple minutes, sprinkle a tablespoon of flour on the heating vegetables, cook them for another minute, and then stir in 1/2 cup dry white cooking wine and 1 cup chicken broth.

Bring to a boil to cause the alcohol to evaporate, and quickly reduce heat to simmer for a couple more minutes. Add 4 ounces cream cheese, grated lemon zest, 2 tablespoons lemon juice and 3/4 cup grated Parmesan cheese to the pot until everything melts. Then, fold in 3 cups leftover turkey, 1 cup frozen peas and 1/2 cup fresh parsley. Transfer to a casserole dish and bake at 375 degrees until everything is warmed through and the cheese turns a crispy, golden brown.

Turn stuffing and extra sweet potatoes into a hash

You may think that there’s no other way to eat leftover stuffing other than how it’s already been prepared, but this dish can actually be used as an ingredient in other recipes. On her blog Girl in the Little Red Kitchen, Susan Palmer explains how to use leftover stuffing and uncooked potatoes and sweet potatoes to create a savory hash you can eat any time of the day.

Shred 2 Yukon Gold potatoes and 1 sweet potato. Spread them evenly across a heated cast iron skillet that’s been greased with 2 tablespoons oil. Cook the flakes until they start to crisp, which may take 10-15 minutes. Then, flip the entire stack over and cook for another five minutes. Gently stir in 3 cups leftover stuffing so it mingles with the potatoes. Flatten everything and cook it for another 10-15 minutes so the stuffing becomes crispy too.

Flip again and create four divots in the hash, where you should then crack a raw egg into each. Transfer the skillet to a 400-degree oven and bake for 8-10 minutes, once you see the eggs whites are solid. Let it cool slightly and top with chopped sage when served.

Using leftovers for new meals will save you time and will ensure you don’t get sick of eating the same food repeatedly for a week.

This article is presented by Jennings Chevrolet.
- + Disclaimers