This site was designed for the latest version of Chrome, Firefox, Safari, and Internet Explorer (version 10+). Some features may not work correctly in your browser. OK
Understanding Electric Vehicles
A quick guide to the electric-vehicle future: HVs, BEVs, PHEVs, and FCEVs

Since Lexus launched its first luxury hybrid back in 2004 (the RX 400h), electric-vehicle technology has been evolving. Chances are you’re already hearing an array of acronyms being used to describe electric automobiles such as HEVs, PHEVs, and BEVs. And if you haven’t heard these terms yet, trust us, you’ll be hearing them more as we advance further into the 2020s—especially as new technologies potentially transition from concepts to Lexus showroom floors. Here’s a quick guide:

HVs: Whenever you see this acronym for hybrid vehicles (also called HEV for hybrid electric vehicles), know that it refers to the hybrid models Lexus currently offers and has been perfecting since introducing its first premium hybrid vehicle experiences in the 2000s. Simply put, an HV combines electric and conventional-engine power, and in the case of Lexus’ current hybrids, requires no plug-in, thanks to the electric motor(s) getting recharged each time the driver applies the brakes.

Lexus has been fine-tuning and widening its Lexus Hybrid model options over the years because their smart combination of electric and conventional power is advantageous on several levels. This includes heightened fuel efficiency due to electric-only power at lower speeds, as well as quick accelerations thanks to the electric motor(s) and conventional engine working together at higher speeds. Note that Lexus recently introduced an enhanced warranty that guarantees every new Lexus Hybrid battery[1] for 10 years or 150,000 miles.

BEVs: Short for battery electric vehicles (also called all-electric vehicles), BEVs refer to vehicles that run solely on battery-stored electric power and are plugged into an external power source to recharge. Lexus designers have been actively exploring all-electric technology as its potential to deliver a luxury driving experience has improved. All-electric power is included, for example, in the Lexus LF-1 Limitless concept vehicle’s range of power options. This concept, as you may recall, envisions a world where a single Lexus vehicle could offer drivers several powertrain options, such as gasoline, hybrid, and all-electric.

Another window into Lexus’ all-electric approach is the recently introduced BEV concept model, the Lexus LF-30 Electrified concept. This futuristic vehicle explores not only the fuel-saving benefits of BEV technology, but also its transformation into a thrilling driving experience. To this end, the LF-30 Electrified—which draws on Lexus’ extensive electric-power knowledge (developed through its hybrid models)—harnesses an all-electric platform to introduce performance-enhancing components, such as in-wheel electric motors for each of the vehicle’s wheels that help enhance vehicle handling and control.

PHEVs: This acronym refers to plug-in hybrid electric vehicles. Like a non-plug-in hybrid vehicle, PHEV technology combines electric and conventional power. The key difference, as its name implies, is that a PHEV can also be plugged in to an external source (like an all-electric car) to recharge the electric motor, as well as use regenerative braking when the driver brakes. One benefit: this potentially increases the vehicle’s electric-only driving capabilities, which is one reason Lexus has been exploring this technology—it’s also envisioned as one of the Lexus LF-1 Limitless concept’s potential power options. 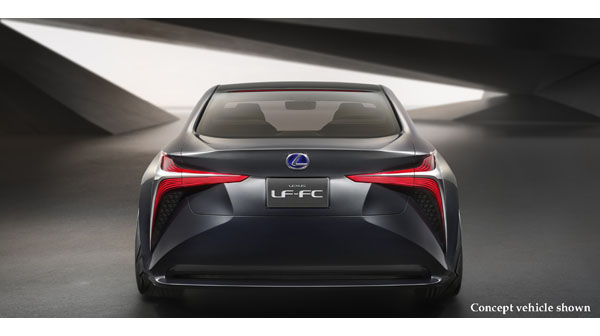 Lexus’ research into FCEV technology is exciting. The Lexus LF-FC concept vehicle, for example, uses several fuel cells to collectively act as a small, compact battery, removing the need for a conventional gas engine and the necessity for heavier batteries required for other electric-vehicle types. The LF-FC’s high-output fuel cell power system transfers power to the ground via in-wheel motors at each front wheel (along with a rear-wheel drivetrain), making the model an all-wheel-drive vehicle.

[1] For Lexus hybrid vehicles beginning with model year 2020, the hybrid (HV) battery is covered for 10 years from original date of first use or 150,000 miles, whichever comes first. Coverage is subject to the terms and conditions of your New Vehicle Limited Warranty. See Warranty and Services Guide for details.
- + Disclaimers